​Its good to be confident,but being over confident is disastrous.

Confidence is just like food that satisfies both the body and mind,and then too much of it;just like too much of food overwhelms the body and crowds the mind,making us succeptible and vulnerable.
In our fight against the problems we face each day,a little bit of fear sometimes gets us the desired results.
Fear helps us analyze the consequences of our actions;its pros and cons. Over confidence tells us what needs to be done,our fears makes us sit done and analyze how it should be done and in which way to go about it.
Fear doesn’t always mean we’re weak,it only shows that we are care enough not to think only about ourselves but the consequences of actions on others.

I had to act fast or I … I was going to lose her. At that point in time our friendship was the only good thing going on in my life and now her parents were sending her away to a distant aunty because they didn’t want her associating with me. But I had to do something now, it wasn’t my fault after all, growing up as a kid wasn’t easy for me at all.

My father was a “no good mechanic” who spends all his earnings on alcohol while my mother sells local herbs and drugs at the local market just to sustain the family. Although I was the only child, I still didn’t get the best things every child could possibly ask for and loneliness was the other of the day as the local kids didn’t want to have anything to do with a drunkard’s son. Mothers would tell their sons not to associate with me or risk ending up like my father. I was always ridiculed and bullied some times because of my small stature,life was just unfair to me.

Despite all this odd,I was one brilliant lad and the little my mother was able to get from her business she spends it on my education even though I couldn’t afford most of the textbooks the normal kids have,I learnt how to make do with what I have.
Watch out for PART 2.

I’m trying y hands on writing short stories, please do comment if you notice Andy error. Critisize if need be,that’s the only way I can improve.

In as much as were excited and grateful to God for the opportunity of seeing a new year, we should also have it in mind that only the calendar changes and everything partaining to us remains the same.

The new year is not the time for us to start afresh, but to pick up where we left off from the previous year. If there are things about you you need to improve on, do so, habits you need to drop, friends you need to change and above all we should be able to reflect on our past having a consice view of the future.

Our previous years cannot be supernaturaly deleted from our lives neither can it be erased and trust me your story won’t be complete without those years. All we have to do is learn from the previous year’s mistake and try not to fall victim again. A wise man once said “keep trying until you can’t get it wrong again, not until you get it right”.

I know our hopes and dreams for the new year is quite amazing, but how many of us have the strength and willingness to achieve them? How many of us posses the spirit of a fighter? How many of us is a goal getter? You should know that we all have equal chances of making it this year,365days, it only depends on how we make use of the tools around us,the love of family, the the friendly faces of our friends and above all the grace of God.

A word is always enough for the wise.

Let this year be the start of something big for you.

We hope that this year;

And the Almighty God grants us the grace and strength to always fight and forge ahead in spite of all odds against us this year. We are not saying this year is when u make it big, all we are saying is this year makes you a better person.

With the new year comes with new resolutions where everybody wants to drop all those bad behaviours they had in the previous year. Each and every new year,we all say we want to change and then at the end of the year, we end up exactly like the previous year.

Action speaks louder than voice they say, and empty vessels makes the loudest noise. Its high time we drop this nonsensical attitude and man up to reality. It doesn’t matter where and when we change, all we have to do at the and of each is to thank God for a well spent year and pray for blessings for coming year.

Happy new year in advance everyone.

Most of us,if not all is familiar with the popular set of crayons and how they function. But have you ever noticed that there’s always one crayon that stays in the crayon box, one crayon that keeps it’s pristine sharp point and neat wrapper?. Not because its shorter than the rest nor the fact that people don’t make use of it, but because its effect its never felt. Another illustration is if I’ve written this article in a name white font,not even a letter will be visible.

Many of you will also agree with me that our lives too consist of white crayons,people that have no effect on our lives. People who neither add nor subtract from us. They either consist of friends who really have nothing to offer or family members whom you don’t see eye to eye on issues.  Sometimes we work so hard on something’s too and never get the desired results or no results at all.

Looking on the bright side,if we make use of wax crayon and watercolour. The wax crayon repels the watercolor paint that is brushed over it and the watercolour paint adheres to the paper surrounding the crayon, making it show up nice and bright!

This tells us that just because we can’t see the result of our hardwork, it doesn’t mean they are not there. We just have to mix the right ingredients together to get our results.

Although white crayons are quite useless, but when used on a black construction paper,its beauty cannot be over emphasized. Or if i had written my article with a white font on a black background. We just have to create a stage for our success to manifest itself, work hard, preserver through all odds even when you see no results coming, someday,sometime success will find you.

We all imagine our lives being perfect but only few of us live the dream.

Yes,you dream, but nobody cares about your goal or how and when you want to achieve them. Rather the result is what gets people taking about you,either success or failure.

The only question now is, what exactly do you want people to say about you?

I therefore challenge you to put yourself in God’s hands and watch the amazing transformation that will take place in your life and how great you will become….
Let’s start the first transformation….
This message is now in your hands…. What will you do with it? It all depends in whose hand it is……let it do good in your hands…
God bless you. 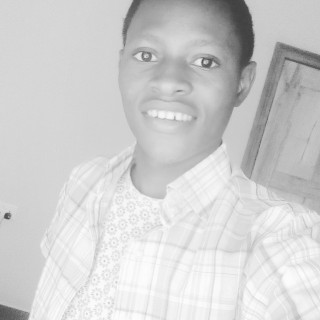 I simply can't get enough of my writing.